This is part two of a post that I can’t post most of yet. I can’t post most of it because it’s miserable as sin, and that doesn’t seem right for Christmas day. Not that I put a great deal of stock in Christmas, but it’d feel kinda inappropriate and ungrateful, so let’s not do that right now. That’s my Christmas gift to you all, to be free of my shit for a few days.

Instead, let’s talk about how the exercise is going – that other thing I’m meant to be writing about sometimes, that’s kind of been forgotten in the last few weeks. By the writing, I mean; I’m still doing all the activities. I am doing them, and how. 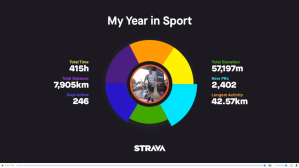 This is my year in sport according to Strava (note that I’m not done yet, but for illustrative purposes I need to stick it in here at some point). In a year where I’ve often whined about not being able to train properly due to other commitments, I don’t think that’s a bad effort at all. I am slightly perturbed that my biggest fan seems to be my boss at work, though.

Training for Ironman Lanzarote has shifted my schedule somewhat. For the last two years, January has been the start of my year, as it has been anyone and everyone else’s. In order to get enough of a training schedule in for Lanzarote though, I had to kick things off in November. You wouldn’t think it would have made too much difference, but starting your training when the nights are still getting darker and colder (and life is getting busier), rather than starting them as they start to slowly get lighter and warmer (and less cluttered), is a bigger change than I thought it’d be.

Funnily enough it seemed to work out fairly well at the start, especially cycling wise. I have long despised the turbo, and still struggle to find any level of comfort on the damn thing. But for the first time ever, I’ve actually been looking forward to suffering in my own garage, by myself. Partly because every time I’ve tried to go out cycling with people since September, some tragic malady has struck me/my bike and I’ve ended up riding by myself anyways for far longer than was ever originally planned, and subsequently I think I’ve developed a pathological fear of attempting to ride outside for the time being. But maybe, also, partly, because I’ve seen the necessity of it. Necessity, or convenience. Possibly both at once, in some cases.

Either way, it’s worked for me. I have been doing okay on the bike, feeling far sprightlier than I did at the start of last year’s training cycle, at any rate. Swimming wise… I guess I’ll go with more comfortable? I wouldn’t say I’m particularly fast, or swimming well particularly often. But I’m a little bit more assertive in the pool, more confident in holding my own in a lane. That is everything I needed, swimming wise. The confidence to actually do the swimming, and push past my own hangups on personal space and etiquette. So far, so good. November is working for me. Two out of three. And then we come to the running.

Running is probably the one area that I’ve felt a little hesitant on, performance wise. If you’d have asked me (and many did) at the start of the year, by which I mean November, I’d have said I’m focusing mainly on biking first for this season, swimming second, and running a distant third. I’d happily sacrifice some time off my run split if it meant improving my bike and swim, because I know I can run damn fast and could pick it up again.

Still, when swapping from Coach Dan (who I would say is a FANTASTIC run/brick run coach) to Coach Tim (with the aforementioned bike/swim focus) I did wonder what effect that would have on the ol’ shuffle. When my training plans came through, I was looking at the running sessions and thinking, where’s the speed work? Why am I not pushing myself, why does it feel like I’m just cashing in easy miles with none of that outside-comfort-zone stuff that everyone says is where you grow? There was doubt there, for sure. 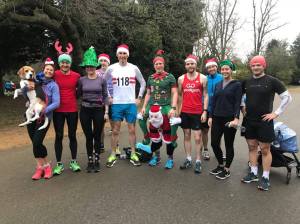 So when the opportunity came up to get a quick time trial Parkrun in before Christmas, I leapt at that. Coming in at just over 17 minutes in my last outing and a twisty, turny, slippery Burgess Parkrun a couple of months ago, and following a pretty sharp XC outing in November, I felt like I was probably, maybe in sub-17 shape around now. A double training day in the preceding 24 hours maybe washed a little of that confident away, but by now Coach Tim had given me my gameplan, and I felt obliged to at least give it a go.

So I rocked up, sporting the usual Xmas-Parkrun outfit of the Goodgym race vest and the Santa hat, indicating myself as a runner who needed to be taken seriously, and yet is definitely fun at parties. One could say it’s the pink Rapha of festive Parkrun outfits. Anyhow, looking decidedly less festive than Coach Tim (everyone looks less festive than Coach Tim), I lined up at the front of the starting mob, hit go on the watch, and promptly realised that I was fucked and there were a lot of very fast people out that morning.

Immediately a front pack of seven, myself included, hared off. Normally I’d have been content to stick with them and gradually fade over the distance, but today I had a plan, and I was going to stick to it. After 200m or so I just accepted that they were going fast enough that I wasn’t comfortable sustaining the effort level, and started dropping out the back of the group. They built up a 100m lead on me quickly, and then sat there until the end of the race. That’s possibly my one small regret, that I didn’t stick with them and see where it went; they were still in sight crossing the finishing line when I was kicking into my sprint, and I wonder if I’d been in a competitive setting and stuck with them, if they’d have carried me around.

C’est la vie, it was a Parkrun, and I had goals to stick to. I trundled along in a bit of a no-man’s land of my own making, telling myself to calm down and reign it in the whole way around, trying not to look at the watch and just think about how hard I felt I was working. I was counted around the first lap in 5:26, and the second in just over that. Some on the fly maths happened, and I realised that if I could sustain it…

…Turns out I could, and I did. My attempt to hunt down the young kid that had dropped off the front group at the start of the final lap kept me moving, and although I JUST missed catching him on the finishing straight, I wouldn’t have kept it up without a target. I looked at the watch, and swore, and then felt bad because there were parents and kids around. It was definitely sub-17.

16:38 is a significant PB for me over 5k – even if you take my ‘unofficial’ 5k PB, that’s almost a 20 second drop. Pretty massive at the pointy end of the field. The coaching is certainly different, but I don’t feel experienced enough to say 100% whether it’s better for me, or it’s just my new commitment to training that’s done it, or doing a time trial mid-training block rather than at the start and then post-event, or whether maybe I just needed a change to kick me into gear and something had to give; suddenly, though, the doubt had vanished as to whether I’d made the right move switching coaches. It’s hard to argue with results.

That said, before I get too big for my boots, I did get held off in a sprint finish by an 11-14 year old, with the same surname as me. As of my recent birthday, even if the kid is at the upper level of that bracket, he’s half my age, and he’s running sub-17 5ks which, judging by the look of abject disgust he gave me when I complimented his run, come fairly naturally to him. It’s nice to be slapped in the face with some perspective every now and again, keeps you grounded. A nice call back to the first ever Parkrun I ran when I got beaten in a sprint finish by a small creature. Turns out it’s a pretty common occurrence. 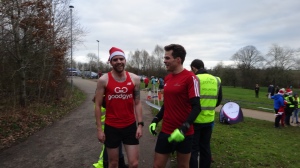 I had another go this morning, although the course was a bit slower; still, a good hit out though. That’s me and the guy that pipped me on the third lap up there. See how happy I look? Exercise, through recent events, has been the one thing I’ve had that I can fall back on. When I’m swimming, I’m mainly focusing on not drowning, and not all the other terrible things that could go wrong that I contemplate for most of the waking day. On the turbo, I’m overloaded with distractions: lactate, Zwift, legs, music, pain, session plans. Running, I either have a plan to focus on, or more recently, have just used it for a bit of mindfulness and an opportunity to escape. Do you know what I’m not doing when I’m running? I’m not thinking about what my face looks like (seriously, have you seen any of my race pics?) for one. I’m not thinking about much, to be honest. It’s nice to be able to enter that empty-head mode when I’ve needed a respite.

Anyway, that’s the Christmas humblebrag over. It’s made me feel a lot better, so thanks for making me think someone might be reading this enough to think it was worth writing. Depressing, angry post to follow, probably on New Year’s Eve. Now that seems more appropriate.

Listening: Hotel Books – Where I Am; I’m loving the move from some of my favourite ‘poetrycore’ bands to a more subdued, chilled-out style in 2017. Would definitely put Hotel Book’s Equivalency and Being As An Ocean’s Waiting For Morning To Come as my favourite albums of the year.

Reading: Thorsten Radde’s breakdown of the new Kona qualifying system and how it would have changed the 2017 pro season: SPOILER – it’s probably not as big a step-change as you might think.

2 responses to “Three Seasons In Wyoming”

The SwedemanAugust 11th, 2018
I will die on this mountain.