Things have happened this week! My Hever castle blog post was shared on the Clapham Chaser’s Facebook page, and a deluge of compliments and encouraging messages have since rushed in my direction. I feel like I now have a bunch more readers to keep entertained. Hi all!

At the same time, I was finally shaking off the last of the Hever castle triathlon pandemic of 2015. After my first sick days in a year, I managed to make it to work on Monday and felt vaguely normal for 12 hours or so.

Then this guy happened. 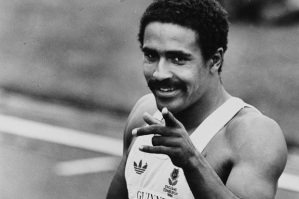 As it turns out, training with a former Olympian (and a bloody good one at that) will do strange, painful things to your body. In hindsight, it would have helped to have been maybe a little more than a day removed from some pretty serious illness, but hey, I’m young, right? I have energy, and gumption, and other young things. I like bouncebackability as a word, so let’s go with that.

Anyway, there was an open training session at Daley Thompson’s new gym in Putney. What I read the advert for Monday’s night endeavors as: turn up, meet and greet with Daley Thompson, spin class, fitness session.

What actually happened: turn up early, get told to go join an extra fitness class by Daley Thompson and don’t refuse because it’s Daley Bloody Thompson, do one fitness class, do another, do a third, do a spin, try not to die/cry/whimper pitifully on the way home. I did intend to get a picture with the guy, but after two hours of pain and failure I felt far too self conscious to get a sweaty, sweaty selfie and wimped out.

The next day was spent feeling like I’d just slow-waltzed across a driving range. It was not pretty. It was not dignified. I could not pick objects up from the floor by Tuesday evening. Stairs were less of a means to an end and something more reminiscent of that weird torture/murder machine from that Kafka short story that I can’t remember the name of (it was bugging me, I had to look it up, it’s In Der Strafkolonie), every elevation taking an excruciatingly long time carving a list of my heinous crimes against my own body into my poor, wretched thighs.

Training for the rest of the week? Pretty non-existent. Wednesday was a day trip to Manchester, to catch my favourite maudlin Mormon misery merchants play in the Cathedral, Thursday was hilarity and a passion fruit pip-sucking contest at Michael McIntyre. I feel like these are acceptable excuses for a lack of training. I think. I do need to cut down on the number of gigs I’ll be going to next year, which sucks a little; but hey, sacrifices.

Before I knew it, the fifth race (actually the fourth after last week’s aborted attempt) of my late season surge was upon me! St Ives sprint triathlon, the final race in the Cornwall triathlon series. A bit far to travel for a sprint, but the family wanted one they could come and watch (in the end only Ma and Pa made it). The things I do for my family, eh? Christ, was this a grueling decision.

The swim was a little peculiar: pool based for one, which just seems out of place in Cornwall. You could actually see the harbour from the leisure centre window. The format of the swim was also a novelty, not doing a length and back in each lane before moving on to the next, but just having two swimmers in each lane swimming back and forth for all 16 lengths. It didn’t quite have that race feeling without having anyone to chase.

Swim time: 11:04, so probably about ten minutes for 400m when you account for the 200m barefoot trek to transition. If anything, I actually swam at a slightly faster pace for the half Ironman relay at Hever a fortnight ago, which highlights how the buoyancy of a good wetsuit helps keep my body vaguely in the right position in the water. Even my Dad, who can’t swim because he has a major fear of getting the top of his head wet – no, I’m not sure how he showers either – pointed out to me that my legs were very low in the water. Oh, the humanity. That famous image on the Hindenburg? I think that’s the approximate angle of my body when I’m swimming without a wetsuit.

I can think of many words to describe the bike course. Seventeen of them are swear words. I spent some time on google translate post-race just to learn enough foul language to describe it. For perspective: the Chaser’s club ride route for yesterday, one of the nasty ones through Kent, was listed as 92k with 1100m of climbing. Today’s 22k sprint bike course had nearly 500m of climbing, which is the equivalent of about double the elevation over the distance. My usual sprint bike time would be around 42-43 minutes. Today was 56:49. It wasn’t just me; the race winner, who posted the fastest split in every discipline, posted a 42 minute bike. I assume he’d usually be closer to 30 based on his performance. So yes, tough bike.

Of course, being Cornwall, it was beautiful. The kind of situation to make a man wish he had a Go-Pro (not that I’d wear one in a race, it’d be terribly un-aero). Firmly into autumn, the southern Cornwall countryside had taken on a very rustic sheen. Riding up and over Tors and past monolithic stone formations, I would have not thought it too out of place if a herd of dinosaurs had trundled through the undergrowth and I’d found myself on the set of Jurassic Park. Maybe being chased by a T-Rex would have made me put a bit more effort in? Who knows.

I’d like to add an interlude at this point: triathlon is a great sport to take up to prepare you for the impending zombie apocalypse. Cycling is clearly the premier form of transport when the undead hordes ravage the earth. Seriously. With the breakdown of society, fuel will no longer be readily available, so you’ll need to be prepared to shift yourself about. The best form of self-defense in an urgent situation is a solid 400 metre plus sprint speed, and as Zombieland pointed out: cardio, cardio, cardio. Finally, do you know who can’t swim (other than me/my Dad)? Zombies. Zombies can’t swim. Rick Grimes, eat your heart out. I got this.

I’m going to need to add another interlude because my brothers just got a nerd gun each and are currently having a running war through the kitchen/dining room where I’m stationed. Just got shot in the face. Grand. 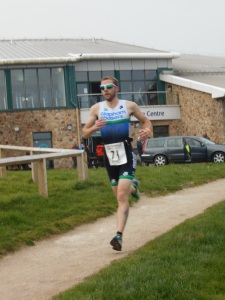 Right. Running. After the hellish bike ride and an awkward transition that I completely made a hash of – sharp uphill into transition, about 5 metres of vaguely flat before the dismount line, only got one foot out of bike shoe in time – the run course was basically two and half kilometres of uphill, and then back down again. My legs, for the first half of that run especially, felt tender. Not at any other point this year had I felt so grateful for brick sessions, and getting into the habit of doing a brick run after bike sessions. A lot of people slowed to a walk. I was not one of them.

I managed to creep in at just under twenty minutes at a healthy 19:58; I said just under, right? Initially disappointed with this, until I realised that it was the sixth fastest run split of the race. Still got it. Does that guy up there look like he’s slow? Does he hell. He looks like a majestic, fashion conscious, sub-20 gazelle.

All this, plus two pretty swift transitions (1:15/0:49, they could have been quicker with a proper mount/dismount), gave me a total time of 1:29:57, coming 65th out of 176th finishers. Outside of the top 20-25% for the first time this year, and my slowest sprint yet. It’s not that the field was of a higher standard than I’m used too, although I wouldn’t say it was any lower; I just wasn’t really prepared for those hills, and the locals probably had an edge on me in that department. There was this great post race shot though… 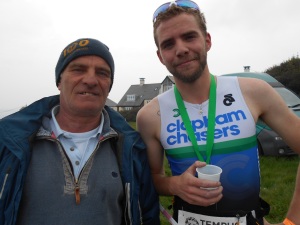 Clearly evident where I get my good looks from, eh?

Despite the result, I’m still pretty stoked. That’s four out of four sprint triathlons completed for this year, and what a year it’s been. What an introduction to the sport. I have taken no podium places, but I’ve been consistently decent at something, and I have shown improvement (this weekend doesn’t count). I even earn my club some league points in one race (Jetstream sprint Tri, an acceptable amount of hills). This year has been the first year of my life I’ve really enjoyed, and triathlon has been a big part of that.

So a pretty significant week? You betcha.

One response to “Race Week: St Ives Sprint Triathlon, or How to Prepare/Not Prepare for Disaster”