Special donation thankyou of the week goes to Anonymous! May you be content to walk around in anonymity, known only by the fuzzy warm presence in your heart.

This will probably be a little shorter than posts usually are at the moment. I am posting this from the empty shell of my old room, because I’m currently stuck in the middle of carrying out the most most stressful task in modern (western, middle class) society: moving house. I mean, as of yesterday I’ve actually moved house, but the unpacking thing is a struggle. As is being the only guy in a house of girls when they all need their beds and furniture shifted up the steep, steep stairs. Whoever said an Ironman is hard…

The training front, unfortunately, has suffered. It’s a little concerning, as this should have been my penultimate week of solid training, an eye-opening precursor to the seven levels of sweaty hell that I’m in for this week. If you’re expecting this to be because I had to take time out to pack/move/unpack, that was the case on the weekend. Unfortunately, during the week, it was simply a case of life stress getting to me, and the times that I should have been packing, training, or doing anything constructive at all, were instead spent sat staring at walls and doing other similar worthwhile tasks, wondering what the hell the point of this all is anyway (the London housing market is not one to encourage long-term optimism). The times I did exercise, I felt weak, lethargic, and unable to focus properly.

Hello, depression, old frenemy. You called at precisely the moment I needed you to.

I have said before that it’d be in my penultimate week that I’d suffer a depressive spell again, and then I’d grind through the last week of training, and then mentally peak during my two-week taper. I was expecting the cycle, and my fragile psyche has not disappointed. Existential malaise has also given me a keen reminder of the causes and reasons that I’m putting myself through this for (both myself, and the Maytree).

Most of all, though, there’s a real sense of accomplishment to being able to look at this and not get too caught up in it, and to realise that it’s just a temporary thing. This used to be a real problem with me, and a victim-complex that (rightly or wrongly) viewed life as a rolling, constant stream of kicks to the gut. I don’t view myself as an entirely helpless cause anymore, because I know that this is all just a part of the mental cycle I go through right now. That’s a real big something. NB Google docs, no I’m not trying to type menstrual, cheers. 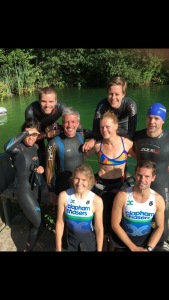 I did, at least, get a decent ride in Saturday – having gone and done a big no-no and tweaked my nutrition without months to go before race day, so I’m eating ever-so slightly more on the bike and taking on slightly less during the run, which made me feel a lot fresher in both cases. Sunday’s swim was a bit lacklustre due to my arms being all floppy and lifeless from the day’s worth of packing that followed the Saturday ride, but I’m grateful to the Chasers above (especially Jags IM, whose opinion I was hanging on without ever directly asking it) for persuading me to go out and run when I wanted to cash it in. No, the run was not pleasant; I felt awful, it was too hot, immediately from the outset I struggled to meet my Ironman target pace even when running downhill, I wanted to quit the whole way through. I guess it was probably the most Ironman-esque training run I’ve done, really.

The rest of the time I’ve had this weekend – really would have helped if I’d got something, anything, done during the week, but hey ho – has been spent staring at the ungodly amount of shit I seem to have acquired. When did all of this happen? When I moved to London, it was with a bag of clothes; at a later date I stretched to moving all of my CDs. That was kinda it. I didn’t own much. Where has all this crap come from? Has it multiplied whilst I have not been looking? Triathlon is awful for this; you get to collect all the crap across three different sports while being locked into a culture of marginal gains, yearly product cycles, and (certainly in my case) having X number of spare anythings in case something breaks. So much redundant kit that a rational person would get rid of immediately.

Meet Agnes. Agnes is, according to the wise denizens of UKCycleChat on Twitter, a 1979 British Eagle. She was left in the garden shed by a former housemate who eloped back to Europe, so I’ve taken custody of her. Also a sofa bed, because said housemate left still owing me money on bills, the cow, so I’m happy to act like the world’s most low key debt collector; and hey, rule 12.

Having quickly patched her up into a rideable state, I am quickly reconsidering the idea of selling her to fund a new dining table. She is awful to ride. Built from what might be solid lead judging by the weight of things, weird gear shifters on the downtube of all places (apparently this used to be the norm, much like flared trousers or Cholera), and handlebars that only have one comfortable position: on the drops. She asks it – nay, demands it – of you. Navigating through weekend high street traffic? On the drops. A casual ten mile comfortably paced commute? On the drops. Climbing Mt Ventoux? On. The. Drops. Also it has confusing backwards European brakes.

Of course I’m keeping her.

There was the moment where all of these peculiarities combined as I clawed my way up the final hill to my new home yesterday – because I always, always seem to choose to live at the top of a hill – stuck in a stratospherically high gear, hunched over the bars doing some serious stem-inspection, trying to drag both myself and this mystically reluctant beast up an incline at about 15rpm. I let out two tears: one for sweet, sweet joy; one for terrible, muscle-burning pain. It was glorious.

Getting Agnes probably ride-ready will have to wait though, as right now I’m staring down the barrel of my last hardcore week of training before Ironman Kalmar. It has been a weird, emotional, exultant and testing process. Part of me can’t wait to get it over with. Part of me wonders how I’ll cope. Either way, it’s time to buckle down and get the physical done, before you can all expect some serious mental introspection next week.

One response to “A Three-Legged Workhorse”