In a complete break from the usual swim-bike-run format, I’m going to start my race week ramblings by talking about the bike. This is mainly because it’s the bit most prominent on my mind at the moment, in that it’s the thing that I’ve got out of the way today. Also I’ve been up since 1:30am so my brain processes are beginning to fall apart and I can only concentrate on the thing in front of me. Does anyone on this island need some tomato soup? I just bought a job lot of tomato soup thinking it was chopped tomatoes. Used it anyway. I need to go to bed. 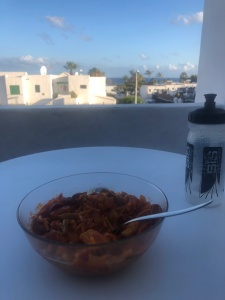 That’s the view from the balcony of my apartment for the next week, tomato-soup-pasta and all. Just the other side of those palm trees is the locus point of Saturday’s big event; the start, site of both transitions, and the finish gantry (already erected, but not yet with the branding updated from 2017). Down there is where I could start what will either be the best 6 hours of my year, or the hardest 7.

It’s hard to tell where I’m at on the bike. When I sat down with Coach Tim at the start of the year (November), we both agreed that this training cycle was all about the bike. I have put my trust in this. I have tried to believe. I have tried not to jib out of sessions unless absolutely necessary; tried, and I would say in 90% of cases, succeeded.

Not perfect, but probably the most consistent 6 months of bike training I’ve managed. I Zwifted through a long winter, into a spring that abjectly failed to behave in a dignified, spring-like manner. In return, I got to tangle with some pros on a Strava segment in Portugal when I was on training camp there (being only a couple of seconds behind the likes of Jasper Stuyven and Ryan Mullen; them at the start of stage 2 of the Volta Ao Algarve, me at the start of a 30k TT, we’ll call it even), and took almost 5 minutes off my Thames Turbo 21.5k bike leg a few weeks ago. 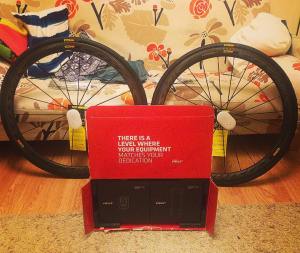 Cycling is naturally more expensive than swimming or running, because bikes are pretty, pricey things, the trophy wives of the sports equipment world. Following last year’s gearing issues at Ironman Wales and being informed that Lanzarote can sometimes be subject to some pesky breezes, I dropped a casual few thousand quid on some nice pretty carbon wheels and some totally necessary electronic gears. Both expensive purchases, but both considered, and appropriate given the locale. At least that’s what I tell myself to sleep at night. Also these purchases happened before landlord-gate, otherwise this would be a different conversation and I probably wouldn’t owe my flatmate so much for bills at the moment (sorry Nic).

So the money has been spent, and the effort has been laid down, and results have been promising. Yet, and yet; despite this, despite all of the above, the bike on Saturday is the bit that is the unknown for me.

As will be described in the next few days, I reckon that without aiming for specific time targets on the day, I can probably predict what my swim and run times will be (give or take five minutes) unless something goes drastically wrong. I can’t do this for the bike. I don’t have that confidence.

Today’s brief foray confirmed that I have never ridden anywhere like Lanzarote. I caught up with a clubmate, Chris, to get a gentle hour in on the bikes. A bit later than planned, ‘cos I’m still more enthusiastic than I am knowledgeable or intelligent when it comes to bike mechanics and maintenance (and also chopped tomatoes) but let’s gloss over that for now. Up and out of Puerto Del Carmen we climbed… and up. And up. It’s pretty dramatic scenery here, there’s not a lot of flat. A gentle climb out of town ended up being a 4km slog uphill with an average gradient somewhere north of 5%. Normally, that kind of climb would be a tough, but manageable climb on a club ride. It being the start of the Ironman Lanzarote bike leg makes it seem infinitely less appealing.

The climbing is only half the battle. Coach Dan, a year or two ago, described to me how he found himself struggling just to move forward with some of the headwinds when he faced Lanzarote. Going downhill. I got my first taste of that today. It’s very easy to ignore the wind and just think you’re fast as fuck when you’re cruising downhill without pedalling at the same speed as the motorised traffic on the main road. Then we turned a corner, and suddenly I found myself dropping gears like Pete Doherty dropped any sense of personal responsibility in the noughties – and, much like Pete Doherty at the time, I was very much still going downhill. Unlike Pete Doherty, I was having to work pretty hard to do so.

Much of what happens for an indeterminate, but probably pretty long, stretch of Saturday is going to be defined by these two areas. Maybe I’ll find my low weight (I managed to hit race weight of 65kg about a week ago, result) on the climbs and aggressively aero position in the winds mean I will suffer the least among my peers. Maybe my low weight will have me knocked about by the wind and I’ll find that my aero position doesn’t matter much when my fragile form doesn’t have the raw power top cope with the sustained, repeated climbing. A 30k TT and a 21.5k sprint triathlon leg don’t really mean much in this context to me.

Then there’s the other drama. As the saying goes, what comes up, must come down. Something I found myself to excel at last year, and am a bit worried about my overconfidence in this year. However, that’s for Saturday morning.

Listening: That Poppy – Lowlife; WHAT ITS CATCHY ALRIGHT

Reading: The Ironman Lanzarote course; yes, I am that dull.