A lot of things go through your head when you’re drunk. I remember patches of one recent episode: an indoor cycling hill climb, flat pedals contrasting with the premium bikes and electronic gubbins that make occasions like this a reality these days. Somehow being able to taste the onset of vomit through my nose, having already plowed through more of the free beers on offer than would’ve been wise for a school night. Ordering pizza, because that’s what drunk people do, but classy pizza now; one vegetarian, one vegan, so many succulent little indications of the way life changes over a few small years. Cold, clumsy hands stumbling over a cracked screen, fumbling as much then as with the keys to your front door later in the evening. Waking up to a muddied head and more Twitter notifications than is to be expected after a Wednesday night these days. And then your stomach drops and you start trembling, and the rest is history. 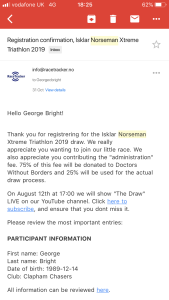 The Norseman is the Swedeman’s older brother. It’s one of what I’d called the big three bucket list races of long distance triathlon: Kona, Roth, Norseman. The black t-shirt is iconic, and fought for with tooth and nail. It’s one of the few races busy enough to warrant a ballot for entry. If I was ‘lucky’ enough to get a spot, I would have had approximately enough time to squeeze in a fortnight’s taper between my other, work-based sporting events next year and toddling off back to Scandiland in search of another stupid mountain to climb. Somewhere, a sensible adult was shaking their head and saying something about responsibility and forward planning. Meanwhile, I was taking responsibility and forward planning – by lining up a support runner.

Despite Drunk George’s somewhat confused protestations – he got my card blocked a few nights ago a clumsy attempt to book several hundred pounds’ worth of ski kit, the prick – I’m trying to wind down my sporting commitments. Sober George has been telling everyone how he’s going to take a break next year: partly enforced by the practicality of working on international sports events running through the best training months of the year; partly because a handful of months rest in 3 years has done for me, for now. My adventures, over the last few years, have been at times fantastic, painful, frustrating, chaotic, and cathartic. Each an accomplishment, in their own ways. Each an achievement.

Time comes for us all, though, when the world of rice measured by the gram and 5am alarms has to cede to other, more basic priorities. Catching up on 3 years of junk food… okay, about 3 months, I’m no paragon of virtue. Enjoying a beer, here and there (and then here and there again). Limiting planned, consistent exercise in favour of racing taxis up the CS7 and down the CS6, and wading through the odd XC course. Somehow still punching out a 73 minute half marathon and by extension qualifying to race the London Marathon next year in the Championship wave. Wait what… 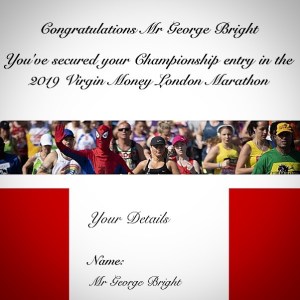 Rewind a couple of months to Ealing, where a case of the near-shits cost me a sub-75 minute qualifying time. Anger is a motivator; one of the fiercest energies there is. The Autumn Classic was my anger-half: 4 ½ boring laps of boring Eton Dorney boring lake, pan flat and simple, pitched resolutely at those wanting a PB course. I rocked up with one goal in mind, and just about managed to not fuck it up.

It was painful: I’d failed to properly thread my timing chip on the strap, so it was whacking my bony ankle with every stride, until it broke skin and I looked down at the end of the race to see a bloody sock. Moreover, having run over half the race sitting sheltered and comfortable in the centre of a lead pack of 6, I had one of those sudden moments of heroism that would’ve earned me a posthumous commendation and lots of sniggering if it were WW1. Deciding that it was unfair to let everyone else do the work, and worried about what they might be thinking about the shirker in the red vest, I stormed to the front of the group and took a hefty turn ploughing our manic furrow through the fun runners were were lapping for the Nth time. A couple of kilometres later and, easing off, I ran myself straight off the back of the group. Heroism is for idiots. I had just enough rage left to not let the gap grow more than 10 metres from 5th place. When we ran down the finish chute and he checked twice over his shoulder, I made no attempt at a sprint. Because heroism.

And so, I’m going to be running a road marathon, by itself, without first trying to drown myself, drown others, or crash into the first cliff/barrier/vehicle/man/woman/small child/dog to come along (I don’t discriminate). I’d made one attempt at a marathon in the build-up to IM Kalmar, but the first achilles crisis put paid to that. The idea reared its head again, slightly pre-Kalmar as a post-Kalmar adventure; but the allure of Roth, peer pressure, and my own weak will killed it again. A fair few people have expressed some curiosity as to how I’d do in a standalone marathon, given my running ‘pedigree’, but the idea didn’t appeal unless I could guarantee a decent start position and a clean shot at the thing.

Well, it’s time for me to put my money where my mouth is – at the front of the world’s most iconic marathon, on a spring Sunday morning; surrounded by a few thousand others so skinny, both in frame and in choice of attire, you could assume it’s just one en masse walk of shame. There will probably be less ass grabbing. Probably.

The way I figure it, with my life due to go to absolute shit in a handbasket in May, London at the end of April is the perfect way for me to squeeze in a training cycle and a marquee event beforehand. I can then go away for a few months, feeling like I’ve scratched an itch, and earned the rest; hopefully the next few months of athletic inactivity won’t feel too frustrating as a result. Plus, pure running training is just so much easier to fit in around a hectic life than swimming and cycling. It’ll be one change, in a series of many I’m going through at the moment.

After the abrupt termination of my previous therapy… arrangement? Relationship? Therapy’s a hard one to define. Anyway, it finished, and now I’m seeing another therapist. It’s a bizarre process, trying to redefine a 5 year process, and all the emotions wrapped up in that. The most I’ve ascertained thus far is that my new therapist feels more therapist-y, in a stereotypical sense. There’s no couch yet – not that stereotypical – but closer, in mannerisms. I don’t know if I like it.

I also don’t know if I need it. The switch from suicidal summer to autumn’s ataraxis has been so dramatic that I’m still recovering from the whiplash. There is an, ahem, mitigating circumstance that has played a large part in this, and it’s still fresh enough to grant the peace a certain fragility. But by and large, day to day, life has become remarkable only in it’s unremarkableness. Things are even. I am on a level, in repose.

Motivating yourself to continue therapy in this state is tough. In crisis everything is fresh enough that I can elucidate it, but when you’re no longer there, it’s much more tiring to overcome the irrelevance of it all. Over and over, coming back to the same old hangups; all-consuming just a few months ago, but incomprehensible now. Someone else’s story. The histrionics of a few months ago are over, leaving just the sense of shame.

It’ll come back again at some point though. That’s just the way it is, and the one wish I hold onto is that I address that. The suicidal depressives’ off-season – yes, enjoy the rest, but don’t internalise laziness. I’ve decided to stick with therapy no matter how cringe-inducing and awful turning up and having nothing to break the silence with is. I’ve failed at this long-term approach so many times before, and I’m not even going to pretend I’m looking forward to it. Clearly, though, whatever I need ‘fixed’ is not ‘fixed’.

It’ll come back again at some point. I will be ready-ish, sort of, maybe, probably not but slightly closer. Rinse, repeat, fail harder fail closer, edge towards the ultimate goal. Isn’t that what we train for?

Halfrust, on the other hand; well. As a blog, it is coming to an end, or an ending. I am finding a natural place to stop. The idea of letting things run their course, letting them end at their natural ending, doesn’t mesh with the above, but it fits here. It’s an attractive idea, that of just knowing when something is done: accepting it, forcing neither termination nor extension.

If I have a regret, it is not ending the blog where it should have ended. If. Depression comes and goes in an endless cycle. I had a compact little story there, after that first year, about overcoming something. I feel I diluted it, as a story, by continuing over the ensuing chaos (note that I say ‘I feel’ a lot, with full awareness that I don’t trust my own feelings to always be spot on).

And yet, I don’t regret it that much. it was also interesting – for me at least, make your own mind up – to track the repetition in the ensuing prolonged meltdown, and to display precisely some of the points made above, that something can be defeated but not dead (not sure if I’m talking about me or the depression here, but probably the depression). There’s a little bit of something poetic in the way things came around again, back to Sweden, in a weird little cycle. We’re creatures of habits, us humans; habits and rituals. Maybe the miserable side of me is what draws me to sentimentalism; if all the shit is recurrent, why can’t the joy be as well? It seems fitting that I started this blog aiming to go to Sweden and overcome a past, that a year later I thought I’d left behind; thought I’d proved myself, in a number of ways.

Having gone back to prove a different, maybe better point this time, I think it’s time to put it to rest again. It’s a less naive, optimistic ending this time – like most fiction I like. Funny that. I wish it didn’t take the best part of two years in the wilderness for me to settle back into some kind of balance, but that’s that. I can be angry at it all I want and it’s won’t change anything other than making me angry. Lord – and therapists, and dangerously unobservant brain-dead taxi drivers, and Hugh Jackman – knows I don’t need much help with that.

Maybe there exists some capacity to come back and just write some race reports, I dunno. They’re a good way to have some sort of creative outlet, and they were always the best posts to write. Usually the funniest, because a lot of funny shit happens in 10 to 17 hour races. At least, it seems funny at the time, in my head. I wonder if somewhere shy of 3 hours’ running will be the same.

3 and a bit years was a good run. Always read it from the beginning.

Listening: Porcupine Tree – Stars Die; everything ends eventually with a nihilistic tattoo and the heat death of the universe

Reading: Hannah Jane Parkinson – ‘it’s nothing like a broken leg’: why i’m done with the mental health conversation; perspectives are important