This could have been a disastrous week.

On Monday my headphones, my loyal audiotechnicas of four years, finally gave up the ghost. I hoped that this wasn’t a prophetic signal.

This was followed on Tuesday with somehow managing to pull my tricep while doing interval sprints anticlockwise around a pond. No, I don’t know how this happened. I quietly resigned myself to a Zoolander-esque life, being really really good looking but unable to turn left. With a sprint triathlon and, crucially, a half-Ironman relay swim coming up, to say this stressed me out a little bit would be an understatement.

Wednesday: Ian survived another week of the bake off. This is the true tragedy of the week’s events (smarmy git).

Anyway, it did get better from there. A hurried packing and a couple of trains later, and there I was, camping in the frozen wastelands of Kent, getting my race face on. My race face looks like a condemned man awaiting execution. Maybe next time I’ll wear a blindfold when I’m contemplating stupid things so that I can’t fill in my registration forms – I’m looking at you, 1.9k swim. And you, Ironman Kalmar.

To cut a lot of waffle, this weekend’s races went… pretty well.

On Saturday it was my individual race: the topically titled Henry VIII sprint plus (800m swim/40k bike/8k run); I managed it in 2:27:46, to place 67th out of 458 finishers (Edit: at the time of publication I’ve mysteriously dropped the to 68th, the horror, the shame, the indignity). I missed my goal time by nearly eight minutes, but continued my triathlon run of finishing comfortably in the top 25% of finishers. On Sunday came the relay race I’d been dreading (especially after having already witnessed how, erm, ‘refreshing’ the 13 degree lake was the previous day). I completed my leg, the 1.9k swim, in 48:10. I have a number of observations on the above which I’m sure you’ll all just be fascinated to hear. I’ll go vaguely chronologically. 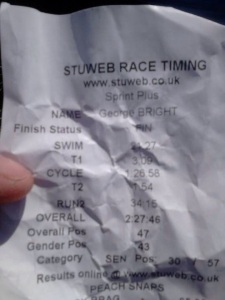 Saturday’s swim is listed as 21:27. While I still feel my swimming is holding me back from my destiny as the third Brownlee brother, I’m not too disappointed with this weekend. A large part of this is I’m not sure how accurate that 800m swim time is – the map of the route doesn’t add up to me, I don’t think the extra 50m over my last open water triathlon is enough to cause a 4 min difference, there was a hefty jaunt to the timing mat just outside transition, my pre-race breakfast wasn’t adequate, the stars had not aligned correctly and goats were not sacrificed in an auspicious manner, the water was bloody cold and I’m a wimp – point is, I hate to make excuses, but in this case I’m going to excuse myself. I actually quite impressed myself with my time for the relay, so for once, I am not going to be too hard on myself for this particular facet of my game.

Transition was a bloody nightmare on account of the cold (a running theme through Saturday’s race). First, I couldn’t get my wetsuit off due to my fingers refusing to work. Then I fell over trying to put my cycling shoes on, because I’d left my rubber bands in my tent, so no flying mount. This might have actually worked out for the best, because (other than the falling over, which made me look like I’d shit myself) the bike out was horrendous. Corrugated plastic boards are not adequate floor cover for the horrendously muddy conditions. Many people fell off trying to mount their bikes due to sliding about all over the place, holding up competitors behind them. I very nearly did, then very nearly another two times traversing the long narrow path out from the field to the roads. Who sticks transition in a bloody field in September? Heathens, that’s who. Heathens and communists.

The bike was horrible. For the first 20k lap I actually thought I may have been sent to some Tartarus-esque plane of eternal recurrent punishment. T1 led out straight into about 4k of climbing. Not overly steep, but by Zeus did it go on (maybe my crime was blasphemy). Worse, I couldn’t feel my feet, and my hands failed completely due to the swim and wind chill, to the point where I had to change gears by smacking my palms against the levers because my fingers just didn’t have the strength. By the second lap, I felt less drained, and could push on a little harder. Overall I’m very happy with my bike time of 1:26:58, which is a continuation of my previous 20k pace but over twice the distance. With conditions as they were, I think this shows improvement. I’ll take it.

Transition 2: Electric Boogaloo sucked as much as the first. My T2 last time out was less than a minute. This was twice that – again, more footwear malfunctions than a Blackpool Hen do. Heathens, communists and Hugh Jackman, that’s who.

The run is always going to be where I do the majority of the work, but my first 4k loop was slightly hampered by still not being able to feel my feet. Still, I can hobble like a pro. 34:15 is way off my usual blistering pace but it was enough to make me one of the quicker runners on the day. Confession: I may have injured a small child on the finish. Moral of the story: don’t high five someone performing a rapid downhill sprint finish. Non, je ne regrette rien. 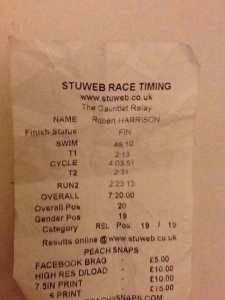 Sunday’s swim was a personal milestone. It started well: I managed to continue yesterday’s manly strategy of being one of the first swimmers in the water, and very quickly staking my claim at the far flung fringe of the start line and refusing to move for man nor beast until the start gun went, in order to avoid the aquatic rugby maul that is a triathlon swim start. This helped my nerves massively. I am a swimming hermit. Don’t come near me with your goggle-threatening kicks and your club-like arms. I am trying to swim in a dignified and composed manner over here, thank you very much.

Also, much like the previous day, my sighting was remarkably accurate. None of the tragic usual deviations from course, which helped massively as half the swim was through a rather narrow brook in which the usual deviations would have left me beached. And very, very embarrassed. There were people watching from a couple of bridges, and my self-consciousness at a couple of points went into overdrive – don’t look completely incompetent, please God don’t look completely incompetent – but I kept a lid on things to come in at a healthy 48:10.

Frankly, I couldn’t have been more chuffed to complete the swim. Was I fast? No. I was slow like molasses, compared to some of the swimmers. My club had entered a dozen or so relays teams and I was the last relay swimmer out of the water by some distance. But in perspective: in March I couldn’t swim 25m of freestyle. There is an embarrassing story about this and my first club swim training session that will probably be dragged out in a later entry. I didn’t fully believe, when I first committed to this particular swim, that I’d actually be able to complete it.

Frankly, the only reason I ever managed to progress to this point is down the the help, support and encouragement of a particularly special bunch of always aggressively shouty, sometimes excessively boozy and finely honed athletes and people that comprise the Clapham Chasers, my tri (and running) club. From my inauspicious beginnings in February as part of the club’s beginner triathlon program, I have progressed as a sporting manchild. They have put up with my completely novice introduction to the sport; they have encouraged me, either alongside of from the sidelines, they have pushed me when I have wanted to quit, they have been there to celebrate every success and achievement. Chasers: you may save the “Aww, shucks, thanks”, because I’m clearly going to need more of your help next year. This buttering up is completely in my own interests.

The importance of a good club can’t be underestimated when it comes to sports. The Chasers are my sporting support network. We are inherently social creatures, and the vast majority of people, myself certainly included, need a support network when facing heavy challenges. It is something I spent many, many years trying to deny. I was convinced in my younger days that opening my mouth about the more awful thoughts I had, the feelings of self-loathing and inadequacy and all that jazz, was a proper solution: sweep it under the carpet, trample it under a weighty wave of self-medication, maybe it’ll fuck off into the ether. Surprise surprise: it didn’t.

Depression does not, in my humble and completely anecdotal experience, ever fuck off. Inception made a great point on this: once you have a thought, you can’t unthink it. I doubt that it is possible to ever move past a suicidal mindset, because once you’ve experienced it, it’s a Pandora’s box: this great evil is free, and can’t ever be contained again. You can quiet it and overcome it, with help. Help for me came in the form of the Maytree foundation, and hours spent in rooms with comfy chairs and bookshelves full of Carl Jung and a really chaotic and ugly picture of what I think might have been a seafront town, that I’d stare idly at when I couldn’t think of any words to say. This became my support network when I needed it in my slightly fragmented personal life.

I find my coping mechanism and now in pushing myself to complete in physical challenges that I had no idea a year ago I’d ever be capable of. There is no way I would have got to this point without a great club at my back, heaving me sometimes reluctantly onwards. It’s much harder to motivate yourself to push yourself in training when you’re out alone, I find. Having someone at your back, pushing you on, or ahead and dragging you when you’re failing, is invaluable. A good sports club displays the best elements of ‘small village syndrome’ as I call it: fiercely territorial, eager to pitch in to help out those in the fold, and a little friendly rivalry between peers (and with the next village along; chiefly the reviled Serpies) to spur you on.

I used to always hate the phrase ‘iron sharpens iron’ as being athletic bro-speak, but in this case it’s pretty accurate. Keeps coming back to iron, doesn’t it? Funny that.

In next week’s episode: Bournemouth marathon festival, my other club, and why it’s fine not to be a super serious fit person all the time. Oh, and the London Marathon ballot.

5 responses to “Race Week: Hever Castle Triathlon, or How To Make Friends and Influence People”