Okay, I bought some tights. No, you can’t see them. I’m a little ashamed. Also they were conveniently delivered whilst I was out on a chilly 90k bike ride where, once again, I was out in shorts and probably could have used them. The universe’s sense of humour is not one I find funny.

Have a picture of my other purchase instead, because it’s far more exciting (you really don’t need to see me in tights as much as you think you do, honest). 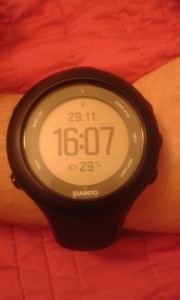 New triathlon toy! Look at this chunky monkey. I’ve spent this weekend having fun with more data fields than I ever knew I needed in my life. I think Black Friday is a terrible terrible blight on the human race in general, but hey, it’s worked in my favour this time. Other than the fact that after two days it’s not telling me I need 109 hours of rest. Quiet down, little watch. Don’t tell me what to do (or don’t do). I’m a completely (debatable) rational human being and I’m fully capable of making my own choices.

This week’s post is all about Determinism, and yes, that’s the best way I could think of off the top of my head to get onto the subject. Christ, that was the most awful segue since… Actually, I can’t think of a better example. It physically hurt to type that. I should probably just retire from this writing business now.

Determinism from a philosophical viewpoint is all about free will, or lack thereof. The strand of it that I find myself most identifying with – hard determinism – basically argues that all events/acts/decisions/movements/whatever can be accurately predicted as a result of every single past and present stimulus the actor is, or has been, subject to. Therefore, there’s no free will for any of us and all those choices you think you’re making are entirely irrelevant. Cheery.

Free will has always been a topic I’m closely interested in. I’ll skip the ignorant rumblings of my angsty youth, and move straight into my angsty student days, when I used to be a part of my university’s Stop the Traffik society. One of my housemates was convinced this was because I was against the idea of people owning cars, which was wrong on so many levels and too hilarious to bother correcting. I was actually a member of the society because I considered forcing someone to live in a state where they were denied free will was a worse crime than just straight murdering them. It is still a position I hold to, but in a slightly different manner.

The idea of free will later became my first line of defence when confronted/confronting myself with angsty anti-natalist viewpoints. While it became complete rationale to me to want to commit suicide, I would still have argued that denying others right to exist on the basis that they will experience suffering is entirely stupid, because while I might have been a miserable sod, even I could recognise that most people in life were not. Anti-natalism just seemed to me a way of projected one’s own suffering onto everyone one else, and of course life just doesn’t work like that.

I can’t remember exactly what the situation was that led to me discussing determinism with Michael but I do remember trying to hopelessly argue against it one week, then coming back the next week and buying into it more than he was. The thing I find with Determinism is it’s very hard to argue against. It encapsulates both sides of the nature/nurture debate, the butterfly effect (no, not that slightly-shitter-but-still-a-bit-better-than-you-thought-it-was-going-to-be film), and chaos theory all under one roof.

I tend to relate it to my own ideas of faith and a clumsy many-worlds interpretation: either space is finite, in which case there must have been some kind of higher being to create it; or space is infinite, and every possible eventuality is happening all at once, and there’s no true past/present/future and everything both is and is not God. Even that malevolent looking homeless cat eyeing you from down the street. It’s all a bit half five in the morning, drunk too much rum and have a dead cigarette hanging from the mouth type stuff. The point is, I believe the second interpretation to be much more plausible, and if infinity is a thing then it makes sense that with every possibility already having happened/happening/will happen, everything’s kind of pre-determined anyways. Or not, because infinity. Infinity is hard. If you accept that infinity is a thing – something the human mind isn’t really built for, like trying to imagine nothing – then it’s a natural conclusion that an infinitely small influence can lead to an infinitely large change in current circumstances.

This also conveniently allows to me rationalise my own depression and poor life choices away as simply being the only possible reaction to a set of infinitely small and varied stimuli. I would like to say it took the sense of guilt from my hands, but I’m still working on that one. Much like the previous topic in this mini-series, psychological egoism, determinism allows me to understand my past conditions as something that maybe I wasn’t truly as responsible for as I would often harangue myself for being. There’s a strong link between psychological egoism and determinism – psychological determinism is a thing, but I prefer to think of psychological egoism as just one sub-level or something of determinism.

The cheery thing about determinism (because let’s face it, it’s a pretty bleak existence) is that it’s actually pretty hard to consider as an idea. Like, I spend about 99.9% of my life completely ignoring it. With so many possible things influencing your inevitable decisions, it’s all a bit of a mess and pretty impossible to untangle; much like trying to imagine infinity or absolute nothing, it just can’t be done. We don’t have the capacity to really get to grips with these ideas because our brains just don’t work in that way, they’re entirely unfamiliar with either concept. So it’s very, very easy to just pass over it most of the time. It’s not going to stop you from thinking you are making meaningful choices unless you really, really stop what you’re doing to think about it. At which point the ice cream van has already left and it no longer matters whether you wanted two flakes or three (three, always three).

Enough waffle: time to do the sportsing-thing. Again, I find I’ve gotten halfway through this and am still unsure as to where exactly I intended to go with this, but hey ho. Obviously this whole depression business has been a big influence on me going for on this Ironman adventure (just in case writing a weekly blog about these two things didn’t make that quite obvious enough). But where I never thought about it that closely, a lot of things seem to make sense about my life going on this foray into some pretty hardcore endurance sports.

I use determinism as a motivator with the following thought: every possible event in my has led towards this. Even the tiniest change could have taken me down some very different paths: could still be writing wanky East London hipster music, for example, but I’m not. There’s (maybe) a bajillion other existences where I’m not doing this – yes, I got tired of writing infinity. But I exist in one where I am doing this, and that idea itself I find strangely motivating, because everything could have been a lot different.

Also, the idea of past influence determining future events should be familiar to anyone who’s ever had the joy of a training schedule. There are a couple of thoughts I have at the moment when I struggle in training, as we all do. One is “Would an Ironman quit?”, and that gets me through a lot of hairy moments (largely when I’m knackered and at risk of drowning in the shallow end of my local pool while the fat kiddies in their armbands point and laugh). The other thought, and slightly more relevant in this context, revolves around the thought that saying I’m up and off to do an Ironman doesn’t mean anything until I’ve actually done it, and I’m not going to do anything in nine months time unless I put the work in now. Past influencing future. There’s only one road to doing well at this and it ain’t easy: grit your teeth, kiddo.

Just to end on a lighter note: there’s also a strain of determinism called nominative determinism, which works around the theory that a persons name can be an indicator of their life paths, eg Usain Bolt was always going to be fast, and Dan Snowman was always going to be a weatherman. My surname is Bright, and I’ve spent most of my life hideously depressed. The universe’s sense of humour…