Before we do the running thing: I’ve just bought my first Tri bike! I overspent by four hundred pounds because I’m about as fiscally responsible as your average heroin addict, and those return-to-centre gear shifters were far too tempting. This makes my new ride the most expensive thing I have ever owned in my life by about four times over (or will be, when it arrives). I’m very excited; already got the stickers and a name ready. Also, my designated second-mother is responding very well to her cancer treatments, which is brilliant. She is also very suspicious of this triathlon lark, but then she has the unique perspective of having seen my literally crawl out of her pub trying to do an impression of a worm. There are certain things that give you an unchangeable view of a person. Anywho, a very good weekend was had in Sheffield (no worm impressions this time around though). Sweet baby Jesus I’m hungover.

There’s also a second big Tri announcement I could be making… But I can’t yet. So there. You’ll have to wait, but it’s exciting news (I hope). In slightly more irritating news, the 3.8k sea swim I was planning on have changed their dates slightly this year from what I was expecting and I can no longer fit it into my calendar, so I now have to try and find an equivalent that works around the races I’ve already booked. Oh dear. Let’s forget swimming for a minute. 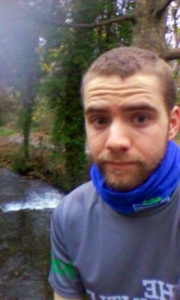 Ah, running. Running, running, running; the ancient and noble art of putting one foot in front of the other. I gave myself an hour to ruminate on this particular facet of my game this morning as I was repping my fashionable Chasers anniversary snood (essential winter kit in the frozen north) around Endcliffe Park this morning. Endcliffe Park is beautiful, by the way; this picture doesn’t quite do it justice, although it does have me so it’s not all that bad. I need to stop making snapchat my default way of capturing pictures though, because for some reason it always makes them really pixelated and blocky and shit.

My running adventure sort of kicked off this whole triathlon thing. I started running last August on a whim, after having never expressed any interest in it previously, aside from that one time I finished last in the 1500m at year nine sports day. School Crosscountry was an exercise in avoiding the teachers so we could slink off for a cheeky cigarette, which I’m sure was not totally obvious to all and sundry once we wheezed back to class. Even into my twenties, the only running I did was the odd jog to pretend I was working on my cardio for kickboxing. In fact, I think I was pretty vocally anti-running, as I thought of it as a really boring and tedious activity and not nearly explosive enough, the domain of those who wanted to wear stupid clothes and be seen to be ‘fit’, without actually being fit. I’m not sure where I got this idea from. It’s a pretty stupid idea.

I’m not sure what changed that made me put on a pair of (in hindsight, woefully inadequate) trainers and rock out the door one evening last year. I had just taken up a new permanent job at the start of the month, and had discussed with the therapist that this was probably my last push to make something out of life, and if I fell over again it was probably done. I was very, very tired of life and picking myself up. So while I can look back now at a two and a half kilometre run up and around Streatham Common and think that’s a ridiculously paltry effort by the standards I hold myself to now, but really it was clearly it was a pretty significant moment; if I hadn’t done it I probably wouldn’t be here now. Not not-here in on a smelly coach back from the North, pressing a bottle of chilled lucozade into my temple in a desperate attempt to stop the samba band that’s having a practise in my head; but not-here as in triathlons, Ironman, etc. It’s a little imprecise to say one run saved my life, but as with the Maytree, I would probably label it a contributing factor, or a decisive moment, or something.

It’s kind of funny that with all of that lack of effort or any prior training, I actually seem to be halfway decent at it. My first Parkrun in September was a humble 24:32, but by February, in my first event with the Chasers I achieved my first sub-20 5k. The personal record currently sits at 17:38, discounting the one time I measured myself doing one in 17:36 but it didn’t count because SOMEONE got me to the finish line late (someone who probably won’t read this because he’s sunning himself in Indonesia, the smug git). This is apparently quick enough to make me the fastest 5k runner in Goodgym! Barring the paid employees of course, because putting me in a race with Shaun Dixon just wouldn’t be remotely fair. You could amputate one of his legs and the guy would still hop faster than me.

A solid 5k time has done me well so far as I’ve mainly been competing in sprint triathlons. Running is, by a clear margin, the aspect of the sport that I am most proficient at. In the events I’ve done, while I’ll usually finish in the top quarter or so overall, I consistently post one of the best run splits on the day. Even at St Ives, the horror story of 2015, I was one of just six to manage a sub-20 on that assault course. For some bizarre reason, I’m also a UKA qualified run leader (thanks to Goodgym). Or will be, when I finally get around to paying the DBS fees for it. Extortionate bastards.

It’s funny, then – and somewhat grating – that I really find running to be my least favourite of the three disciplines to train. I like group runs, those are fun, even if I’m still a bit shy and terrible at the social aspect of those. I like running in the rain, especially when hungover, and if no-one’s about at the end of the run I will sometimes pause, stretch my arms out and look up, just soak it up, like that bit at the end of the Shawshank Redemption. I think a good hangover is definitely as much of a trial for me as a murder stretch.

Things like hill sprint sets and the like, they’re not things I want to do, they’re things I have to force myself to do. It doesn’t give me the same kick that a good swim set of ride will do. When I’m in an actual race, that all changes; I look forward to the run in a triathlon because I know it’s where I’ll feel most secure and competitive. But intervals and fartleks and all that jazz is a bit meh.

One thing I would credit as being key to my consistently strong running performance in triathlons is the emphasis I place on brick runs in my training, something I’ve been discussing a bit recently. While being a fast runner in general obviously is a good start, and my poor swimming/average biking means I’m not confident enough to be totally killing myself on those legs, I don’t tend to suffer as much especially at the start of the run as many competitors I drop in the first kilometre or two.

The general rule of thumb I try to stick to is this: if a bike ride requires clip-in shoes, then it requires a brick run afterwards. Now I have started doing the odd cycle-commute I do skip it for that, because I think my boss would get a bit pissy if I started work thirty minutes late because I had to go and run around Lampton Park in circles first thing in the morning, but any training ride I will try and get out afterwards, even if it’s just a short one. When I had just started training, I went out for a very tough ride in Kent with my housemate and a couple of friends from his cycling club; I discussed needing to go out and do a run after this seventy mile jaunt and one of them assumed I was training for a half Ironman. When I said no, it’s just for my first sprint, he looked at me like I was mental (to be fair, it was fairly mental). Always do brick runs. Getting used to that jelly feeling and being confident enough to push past it has been an invaluable tool for me.

I’ve also attended a few of the Chasers brick sessions – which are some of my favourite training sessions, weirdly – which is where I met Dan, who is my coach for this Ironman adventure. Dan’s done a few of them himself, going under 10:30 which is silly fast, and is a bloody good runner. He also does the odd Steeplechase, which as someone who’s training for a race that might actually cause me to have a massive heart attack, I think is a bit of an odd event. But he’s a great coach, fantastic at breaking things down in a logical manner, so I’ll forgive him the weird track stuff.

The one area where I feel underprepared going into an Ironman triathlon running wise is the fact that it’s so much longer than I’m used to. Yes, I’m not terrible over 5k. Great. But I have never run a marathon – I’ve done some hefty training runs, but race situations are totally different. To this end I’ve entered into Brighton marathon in April, the first of my big training races, where I am hoping – tentatively – to try and hit qualifying time (three hours, five mins for me). I’m completely untested at the distance and have been informed that as I don’t have prior record of achievement I can’t start in the fast pen, but I still think it could be doable if I can manage the distance without exploding. We’ll have to see how training goes; as I can’t just be focusing on my marathon running I think it’ll be a bit of a stretch, but I’ll give it my best shot. I’ve also signed up on short notice for a 10k in Regent’s Park where I’m going to see if I can hit 37 mins off the back of three successive nights of Christmas parties. Yes, I am a masochist.

This should put me in good stead for Kalmar, where I’m planning to run/walk/waddle/crawl the marathon distance in three and a half hours, or something resembling that. Again, I don’t know if this is feasible or realistic in any sense, but I have definitely been having a period of setting lofty goals without a whole lot of forethought. I like to think that with eight months of solid training under my belt I can do this, and it’ll cap off a great race and the most fantastic moment of my life. Only time will tell.

2 responses to “Aren’t We All Running?”