So this was meant to be the last post in the philosophies of George mini-series… But we’ve got a lot to talk about, so that will have to wait until next week. Apologies, I know you’re all going to be so gutted, but I’m sure you can last, yeah? Hang in there. We can pick up the intellectual wankery again next week. 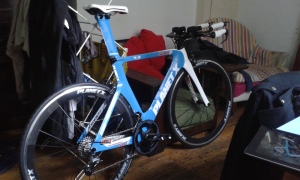 Meet Agro. Ain’t it a beaut’? I like to think in this case my financial overindulgence has turned up trumps for once. Unfortunately, I haven’t been able to go riding quite yet – really need to get a bike fit done first and see about that seat post, have been busy busy busy, would help if I wasn’t too hungover to figure out why I can’t get the damn pedals I’ve bought to screw in – but I am still super excited with my new toy. Even purchased some second-hand rollers on eBay so I can get some early practise in on how to keep the thing upright and moving, hopefully to reduce the chances of looking like a right dick when I turn up to whatever the first race of 2016 turns out to be with my new ride, and then promptly topple over sideways as soon as I exit T1. Oh, who am I kidding. That’s probably still going to happen, and it’ll be hilarious (to everyone that’s not me, obviously).

On the subject of hangovers, training this week has been nonexistent on account of Christmas shindigs. Who schedules three Christmas parties on three successive nights? I’ve been existing mainly in a state of rolling hangovers for the last 72 hours, and am no longer on speaking terms with my liver. But these are probably some of the last big nights I’ll be having now until the tail end of next August, so my liver can just man the hell up and deal with it. You’ve been through worse, little withered old friend, you’ll survive.

Unfortunately, I did miss the 10k race I was meant to be doing this morning through oversleeping – oops. I’m now scrabbling about trying frantically to find another to do before I elope for Christmas. I could just, like, go to a park and do my own little 10k, but where’s the fun in that? Also, as it’s meant to be an exercise in how fast I can manage the running thing (preferably when sober), I’m worried that I wouldn’t push myself hard enough if I ran it by myself.

Also on the subject of Christmas, I did another piece for Yellow Jersey! You can read it here. It’s a lot more whimsical than the last time I wrote for them, so that’s good.

Also also on the subject of Christmas, this happened.

So this is equal parts weird and amazing – yes, I’m now ‘famous’ enough that people come as me to fancy dress parties. I have made it. I am firmly escorted in the big leagues, and there will be a feature film about my life some time in the next few years (Freddie Fox, just saying). Or at least, I think that’s someone dressed as me. That’s definitely my tattoo, but I’m not sure on the speedos. If there’s one thing that going to make the cute lifeguard at my local pool even less enamoured with me than single-handedly keeping the pool open all the way to 10pm most Mondays, it would be if I started swanning about in those…things.

While this week has been largely based in frivolities, there are sporting developments coming in the near future – chiefly and immediately, I am leading my first Goodgym session on Tuesday! On the downside, this is kind of mildly sort of terrifying: I can’t really say I really feel qualified to be directing groups of people in athletic endeavours (even though I have an actually qualification that says I can do just that). On the upside, it’s great to be getting more involved on the organisational and leadership side of things for a club that I’m very passionate about.

There is also another small matter of new responsibilities going forward – so, last week when I mentioned something awesome had happened but couldn’t really explain it at the time? I’ve now properly and officially accepted the position of (drumroll) Clapham Chasers London League captain!

For those not in the know, the London League is a series of triathlon-based events, 12 in total this year, where the different clubs in the London area duke it out to see who has the best swimbikerunners out there. 2015 was a year of Chasers domination as we scooped three of the four team awards, taking the Women’s, Mixed and Mob Match prizes and only missing out on the Men’s by a few points; there was also a smattering of individual winners through the various age groups. Because I’m a fucking pro, I even managed to sneak into the top 10 for my age group – albeit I didn’t actually complete enough races to get a final score and position, but I did giggle a little bit when I found my name in the results from last year.

I now have the enviable and prestigious task or trying to persuade, blackmail and bully enough of my fellow lycra-fiends to enter these races that we’ll have a shot at defending the titles we have and pushing for the one we don’t. Of those three, I’m particularly looking forward to the blackmail, I think. Chasers social events are choc-full of scandal so I think I can get particularly creative in that regard, but the bullying bit might need a bit more work. Weedy endurance athletes in one pieces aren’t known for being particularly intimidating.

All in all, the events of recent weeks have all been a bit… Not sure what the right word is. Every time something else fantastic has developed – the bike, stepping up at Goodgym, the Chasers captaincy, not the slightly obscene fancy dress (sorry John) – I’ve been stuck trying to work out how exactly my life seems to have gone so far off the piste that I’m used to. Captain of a sports team? If you told me a decade ago that this would ever be a thing, he’d probably assume it would only ever be a) a chess team or b) he’d say nothing because he’d be too spangled to understand the concept of what a sport is. The phrase “well that escalated quickly” has become so overused as of late that I need to erase it from my vernacular and find some newer alternatives.

To become a bit more somber, all of it couldn’t have come at a better time. I always struggle with the November/December period leading up to my birthday; I’m not sure if it’s just winters being grim, or the emphasis we place on this one day a year making it a natural marker point for introspection, or whatever. The last few weeks have been pretty much me trying to mentally firefight a series of shit drops in my mood while retaining some semblance of functional life.

Having these new responsibilities and reminders of what I’m doing and where I’m doing has been a great help in keeping me focused on the big future picture, while making sure I’m not getting lost in familiar old traps. I can’t really understate how important that’s been of late.

As a footnote, I’ve decided I’m going to play about with the format of this blog over Christmas and add a few more extra pages on stuff and things. I haven’t firmly committed to any idea yet, but there will be some aesthetic changes and (hopefully) interesting improvements. Keep an eye out for those!