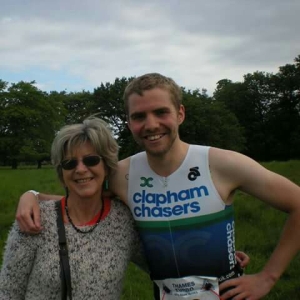 That picture has been on my About page since I started this blog. It’s my Mum and me, at the finish line of my first triathlon last May (one of the Thames Turbo sprint triathlon series). She’s one of the biggest fans of this blog business, the first person to chuck money at my fundraising thingy, and is coming with me to Sweden in August to watch me become an Ironman. And then probably whinge at me that I’m not doing enough ‘cultural’ things in Stockholm and attempt to drag me around an art gallery or two (I have a long running feud with art galleries). Happy Mother’s Day Mum!

Monday: 1 hr 20 mins swimming
Tuesday: 20 mins S&C, 40 mins running, 15 mins each way cycling to Goodgym and back
Wednesday: 1 hr swimming, 15 mins each way cycling there and back
Thursday: 1 hr 10 mins swimming
Friday: 15 mins running, 40 mins stretching/torturing myself with a foam roller
Saturday: 1 hr running, 1 hr turbo
Sunday: 4 hrs 20 mins cycling, 20 mins S&C that I’m meant to do but I have a party to go to so I don’t even know why I’m putting it on this roundup

Full disclosure: while I knew it was Mother’s Day, I had got so wrapped up in stuff until Chrissie Wellington kindly reminded me on Twitter. Cheers, Chrissie. Today’s quest around the Windsor loop was prefaced by a 5am start to go and help set up race HQ for the Thames Riverside 20, a twenty mile race along the Thames and back organised by the Clapham Chasers. Setting up race HQ involved: project managing gazebos, the world’s busiest goody bags, and glorious free coffee samples from Truestart Coffee. I’m not a massive coffee drinker, but they might have converted me (and kindly watched over Agro for me while I was mucking about wearing a fluorescent vest).

Training has gone very well this week on the whole. Swimming has been very strong, and I’m back running continuous distances, which feels incredible after having missed it for so long. Yes, I know: slowly, slowly. I’ll get there in time. My cycling has been much reduced this week after last week’s monster effort, but my TT ride today was strong – I managed to hold my HIM pace in 20 min segments, unlike last week, and even felt strong enough to chuck an extra burst on top of what was planned at the end. Having missed yesterday’s group ride probably helped in this as I was a lot fresher. I’m also trying out Zipvit’s nutrition stuff at the moment, and I think their caffeine gels might have helped. I’m less of the opinion that they taste like rocket fuel, and more into the idea that they actually are rocket fuel. I may have grimaced every time one went near my mouth – the best I can say is that the blackcurrant one tasted like thickened cough medicine – but those things pack more energy than Tyres (I finally worked in a Spaced reference, yay). Vroom vroom.

Missing a Saturday ride? Well, I had a damn good reason – frolicking about in the Chilterns with the fine folk from Ashmei, as I’d been shortlisted as a possible brand ambassador for them. Now, they haven’t actually made the decision (or made it public) yet as to who did or didn’t make the cut, and I Ummed and Ahhed a long while about how much to say on this subject, as they might well be reading this, and I’m not sure as to whether it might impact or not on my chances. However, as is the standard with the blog, I’m trying to be open and honest and all that, so my opinion is…

Full disclosure: nope, probably not. I think I probably got too caught up talking to the other hopefuls to make much of an impression on the current ambassadors/company staff/boss, which is exactly what we were meant to be doing: so yeah, I’d be surprised. Absolutely not a wasted trip though – not just for the free socks, although they’re very nice socks. I’ve not actually worn them yet, just admired them from afar and stroked them from time to time. I’m a bit scared to get them dirty, to be honest. That reminds me, I probably need to go clean my trail shoes.

Learning the ins and outs of the thought processes that go into designing kit was pretty cool, and a gloriously hilly/muddy trail run was had (the first time I’ve properly used my Inov-8s since my woeful efforts to race crosscountry over the winter). Meeting all of the other potential ambassadors was great: there was a real mix of sporting people there from a lot of different backgrounds, and it’s not really a loss at all that I spent a lot of my time being a social butterfly and getting to know many of them. I’m going to give a particular shout out to The Marathon Marcus, who’s a very cool dude currently training for the London Marathon, and blogs about similar things to I do; or the things I’m supposed to, before I get derailed and go wildly off topic.

Full disclosure: at this point of writing my page suddenly closed unexpectedly and Google Docs took a while to register that I’d actually been working on this post, spend five minutes loading the sparknotes version before it finally updated with this semi-written article. I nearly put a pint glass through my laptop screen. Screw you, Google Docs. Don’t ever do that to me again. This is weirdly creepy as it happened just as I finished the above paragraph. Now I’m getting derailed again. Dammit. How many minutes did I spent writing this?

Really, it was a massive boost to my ego (yes, I have one of those) just to have been shortlisted. An actual sporting company, and a very high-end one at that, interested in having me represent them? That’s preposterous. I had this moment on Friday night, when I was stood on the stairs, sweaty and covered in oil and grease, holding a loose tyre and a bare wheel, mashing the two against each other like an exceptionally hairy and sweary toddler with a square peg in one hand and a round hole in the other, trying vaguely to make them fit together; and as I performed this vulgar act I was suddenly paralysed with the thought of how absolutely absurd my life is. It struck me. I had to sit down. Maybe if I hadn’t been thinking about this I’d have the damn tyre on already.

See, this week is a profound one in the Half Rust calendar, because it marks one year since I started training for that first sprint tri that I look so happy for having finished. Monday 2nd March: first training session with the Chasers, a social run around Clapham Common. Wednesday 4th March: that slightly infamous first swimming session where I nearly quit after failing to do one length of the pool. Monday 25th May: first sprint triathlon. Sunday 14th June: winning league points for the Chasers with a storming bike leg in my second sprint triathlon. Saturday 12th September: UK athletics qualified run leader. Sunday 27th September: not drowning and successfully finishing the swim leg for a relay team in a half-Ironman distance race at Hever Castle. Wednesday 2nd December: offered post as London League Captain for the Chasers.

And now there’s me, training for an Ironman, training to not just complete an Ironman but to hit a very respectable and ambitious time, flying around Windsor on a £3000 bike with a grim expression (it’s my pain face), swimming like an only half-paralyzed fish, ranting about people being in the same building as me when swimming on twitter, writing two blogs, trying to get a third going, being noticed by sports companies, preparing to lead my club to glory in the first league race of the season. This is all a bit mental. This is all a bit much. I’m in so very, very far over my head at this point that I can’t even see the surface – and I fucking love it. This is my takeaway from the stress I’ve felt over the last few weeks: it’s bloody brilliant, ain’t it? Stress is brilliant, because I’m stressing about constructive things. I would have never, ever seen this for myself. I think I need to stop and have a warm cuppa and pat myself on the back, but frankly I don’t have the time because I am just too damn busy doing amazing shit I love and working hard to be more like the person I want to be, and that’s really, really cool. Life is cool. That, in itself, is a weird feeling.

With Ashmei out of the way, I’m turning to the next big thing on my calendar, which is the first of this year’s Thames Turbo sprints: the first race that I’ll be assuming my Captain’s duties for. Next Sunday, I’m leading my first Chasers thing by myself (not shared duties, as was the case earlier in the year) with a recce of the bike course. Then there’s planning, plotting, and scheming to be done before my first race of the year, and a golden opportunity to see exactly how much I’ve progressed over one year in triathlon (or ten months, if you’re going by last year’s race date). After Worthing Half Marathon unfortunately fell through, this’ll be my first race of the year, and I’m really psyched to be getting back in the game. Argh. Let’s do this. I’ve just psyched myself up so much for this, I need a beer. ‘Till next week.