Well, so much for a nothing week. This was supposed to be some kind of interlude between the titanic efforts of last week’s Chiltern 100 and the terrifying leviathan that is next week’s Big Fish swim. Instead, I did my second century ride in two weekends, the longest run I’ve done this year, and had just enough time to enter into the murky and dangerous world of underground (not actually underground in any way, shape or form, but it sounds more dramatic) cycling time trials. My body hates my head so, so much right now.

See, I can tell that my body hates my head because it’s trying very, very hard to get rid of it right now. I feel like I need a neck brace to stop my noggin from rolling off right now – that’s what six hours of aero tuck will do to you. The rest of my body is fairing none too well either; the first thing I managed to do this morning when I got out of bed was too promptly collapse into the mess of perennially sweat-soaked training kit that I call a bedroom floor, because my legs hadn’t quite got the memo that now was real world time again, and real world involves things like standing, and walking, and general load-bearing.

Terminator like, I did manage to one-armed crawl (one-armed because my left shoulder if also failing) from my room and did, eventually, manage to make it to work, where I am now trying very hard to neither walk nor talk like a bobble head John Wayne. The talking is nothing to do with the cycling, I just feel that if I’m going to walk like a cowboy then I should properly commit to the role. Also I hit my head.

Ah, the big C word. Commitment. I like committing to things. In fact, I probably overcommit to things. Certainly to ideas – Ironman. Don’t feel I need to say much more on that. Less so on the actual doing of stuff, sometimes, as swimming this week will suggest – I’m not sure ‘I just don’t feel good’ is a particularly valid reason for cutting Friday’s set in half. It’s not all bad news, though. Over commitment can lead to a do it properly or don’t do it at all approach, which is an example or black and white thinking; which, in turn, is a strong indicator of low ’emotional intelligence’: a common term bandied about when people try and explain depression (and a term that has been used by many people with lots of letters after their name to describe me in the past). See? I am growing as a person by cutting these swim sets short. How d’ya like those mental gymnastics?

Committing to silly ideas is kinda why I’m feeling so broken today. I’ve been intrigued by the idea of TTs pretty much since I got an actual TT bike, but for various reasons none of the others I planned on making this year worked out. So when a few Chasers decided to aim for the ten miler yesterday, in my head, I had pretty much obligated myself to do it. Never mind the twenty mile run I had planned for the morning, that’d just be a warmup. Casual, like. Never mind the two stops I had to make on account of punctures on the way there, and never mind that I need to now buy a new CO2 pump because mine keeps dragging the valve cores out with it. I could just buy a valve core tool and meticulously go over every spare inner I have to make sure the valve is properly tightened. Honestly though, if it comes to a puncture on race day, I don’t want that uncertainty. I’d rather just know I have a solution I can rely on, even if it costs me a few bob extra. Thus was George skint again.

I did eventually manage to arrive at the race, and wow. Cycling TTs are a strange world. People take this really seriously, don’t they? Rocking up to a pretty inconspicuous village hall, you don’t expect to have literally tens of thousands pounds worth of bike everywhere you look. Agro’s a plucky beast, but crikey. Some of these things were an absolute lesson in the beautiful aesthetic effect of spending a mortgage on rapidly diminishing aero gains. Skinsuits everywhere as well. And latex Velotoze sock-things, that frankly look like a bit more hassle than they’re worth. If the bikes looked funky, the people were definitely looking funkier. 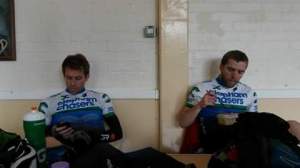 And now we come to the attire issue. That’s me there, ‘carb loading’, in a very kindly and hastily borrowed but slightly oversized and baggy club jersey. Apparently I can’t have uncovered shoulders in a TT race (almost as big a travesty as the week’s big high heels furore, which is truly, truly stupid). I’ve googled it this morning and I still have no idea why I need to cover my shoulders. Unfair aero advantage? I’m not even sure how bare shoulders would aid with that; it’d have to be something pretty bloody spectacular to bridge the five-and-a-half minute gap between me and the guy that won it. Prudishness and sense of decorum? They’re shoulders, we all have them, get over it. I mean, it’s really not even that big of an issue, and I probably should have paid more/some/any attention to the race rules in advance, but it just seems pretty arbitrary.

One long run, two punctures, and wardrobe regulations later and I actually managed to post a time: 25:47. Not bad considering the circumstances, but I’m a bit disappointed that the Chaser’s head of cycling beat me by a measly five seconds on a road bike (dammit Nic, next time). Also probably would have helped if I’d remembered to tighten my helmet after I put it on so I didn’t have to spend half the race readjusting it, looking like I was trying to pose for a very elaborate photo but hadn’t quite properly understood the concept of dabbing. But hey; that one’s my own stupid fault. Won’t be making that stupid mistake again, he says confidently.

Of course, I’m full of a veritable bevy of stupid mistakes. Unfortunately, due to forgetting to charge my watch overnight, I ended up leaving for Sunday’s scheduled one hundred mile ride at ten, rather than seven as was planned. Battling through light Sunday morning traffic – fine. Battling through not-light Sunday afternoon traffic – fuck balls I’m going to die any second now. Also, there goes any free hours I expected to have in the day, because everyone knows that you’re not going to achieve anything useful when you’re waiting for things to charge. It’s prime procrastination time. Also I had to go to the loo about half a dozen times, because apparently my bladder goes into overdrive as soon as I put training kit on (usually up to the point where I start actually doing something, which obviously took a while today). Fun fact for y’all.

In all honestly I probably should have skipped the ride altogether – I’m pretty skittish in traffic on a road bike, let alone when I’m sitting astride what probably should be my life savings – but unlike a swim or run, a six-hour ride is not something I can catch up on over the coming week. Catch up? Yes, I have been told countless times not to think in this way; a missed workout is a missed workout, get over it. Last week’s Chiltern 100 went reasonably well, and gave me a lot of confidence, but it was a hilly course suited to road bikes. I feel like I needed to get the miles in on Agro just to put that particular niggling voice to rest. Overcommitment, maybe?

So off I went, and a day later I can’t properly feel my lower legs, I wish I couldn’t feel my left shoulder, and it’s very painful to look up and absolutely impossible to look down. Held together with duct tape and bad intentions, me. On the plus side: one hundred and one miles, in just under six hours moving time, on a ride that: had traffic, was hillier than Kalmar, was done on five hours’ sleep and a day after a hilly twenty mile run. Yep, it was just over ten miles short, and half an hour slower than I intend to be; but considering the circumstances I’m feeling very good, all of a sudden, about that proposed five hours thirty minutes bike split. I even sneaked in an unscheduled short brick run, because I’m a beautiful free butterfly who don’t get told what to do.

Again with the really long bike ride, though, I’ve come away from it feeling more impressed with my mental attitude towards it that the physical job of actually doing it. There was definitely a point, about fifty six miles in, where I could have turned off the main road, gone home, and called it a day. I’d just finished one large loop; it was the perfect point to stop, and by the time I’d have got home, I’d have still break seventy miles just getting home. Moreover, I’d actually have some time to get things done in the evening, as committing to Ironman Sweden has really meant I’ve been not-committing to other basic living things like having enough food in the house at any one time to feed myself.

But no. I forged on and I hit that mileage, and I hit it damn hard. It may have taken the better part of my waking hours that day, and left me feeling more fragile than one of them wanky minimalist sculptures you’d find it the Tate Modern being dangled over the edge of a twelfth floor balcony, but I did it. I committed. This whole experience seems to be about finding where to draw the line between going hard enough that I’ll be ready and not getting too obsessed about one thing that my entire life falls apart around me while I do so, but in this case I think I made the right call. At any rate, it gave me a good excuse for pizza tonight in place of proper food.

There will be a time when I need to learn in some other aspects of my life to pick my battles a little more carefully and cleverly, but for now, I think I’m doing okay. I guess Sunday’s Big Fish swim will be the judge of that.

Oh crap. I’ve forgotten how to sight, haven’t I?