Well, I’ve completed my first key training race for Ironman Kalmar – and I’ve come away with just one burning question. Does anyone happen to have any spare knees? Mine are ruined. Trashed. Expired. My legs in general, as two complete units, ain’t that bad today; but the knees? Oh, they’re suffering. This must be what it’s like to feel old. No, I’m being facetious; I know this isn’t actually what it’s like to feel old.

This has been a very cycle heavy week, which logic would dictate is a really stupid idea leading up to one hundred and six miles of undulating hell that people call a ‘Sportive’. Most of this cycling was not exactly planned into my weekly schedule, but just kinda… happened, like Tuesday night shots and stripclubs. That’s not a veiled anecdote from this week, Coach Dan, just an example. I actually turned down the invitation to go to a strip club. How very sensible of me.

Anyway, I can now very conveniently segue into talking all about strip clubs – erm, cycling and my thoughts on it as an Ironman-in-training. Previously, before this whole regimented training plan thing started, cycling was very much middle of the pack for me both in competency and in enjoyment. Well, I’ve decided I fucking love cycling. I’ve not yet decided whether I’m anything more or less than average at it.

Out of all of the components of my training plan, I’m definitely enjoying it the most right now. Even throughout throwing a bit of a training tizzy a couple of weeks ago, cycling was about the one thing I have reliably kept up without mental or physical strain preventing me from doing so.

A large part of this is my new life companion. Who needs strippers when you can be having this much goddamn fun at 6am on a weekend morning? Not me. I’ve been described as both ‘tight’ (in the physical sense, not the financial one) and ‘glowing’ (in the physical sense, not the radioactive one) in the past few days. I ain’t needing no strippers. Ahem. As I mentioned in the original post I did on my thoughts about cycling, buying Agro was not the most financially prudent decision I’ve ever made – especially with all of the additional expenses I’d not really figured out in my head, such as bike fit, new saddle, new stem, pedals, tires, tubes, and a succession of nutrition/hydration systems (in the middle of a nice email chat with Fred from Profile Designs as I write this).

Agro, for me, is not just a bike. It’s a representation of the whole Ironman experience for me: the idea that life is about doing fun things, but not necessarily sensible ones. Riding on a TT bike feels so much more dynamic, powerful, and exciting. That extra foot closer to the floor really does change your perspective on things – there’s so much more impetus.

This isn’t to say I haven’t been enjoying regular rides on The Normandy, either; there’s a time, place and purpose for road bikes with hill-specific groupsets. But part of the reason I am enjoying TT rides more is the same reason I despise turboing so much – I love the feeling of movement. Ever since I was a kid I loved travelling, even on the most mundane journeys. If you (or in this case, I) wanted to be an armchair psychologist, you (I) could say that this probably relates to never really feeling settled or comfortable anywhere. Sod that bollocks, I just like the feeling of going fast.

Cycling also means escaping the wide reaches of London for a few hours. I like London, but I don’t think I love it. Maybe it’s just recently, but sometimes being here feels like a bit of a drain – everything’s so all over the place and hectic all the time, which I like, but which is tiring. Especially on the training front, something I alluded to both in the original cycling post and in last week’s running focused ramble. Like the poor old guy (Brooks) in the dramatic middle bit of the Shawshank Redemption, I don’t feel like I understand this place all of the time. Don’t worry Mum, not about to hang myself by my HR monitor strap. I mean, it’s elastic, it’s really not cut out for the job. Still not being serious, Mum. I like my humour like I like my coffee these days – cold and black.

Soooooooo, on to the race report that everyone (one person) has been waiting for; the Chiltern 100 Gran Fondo: 106 miles, 2700 metres of climbing. This should have been an abject disaster, in retrospect. I did a lot of silly things, but somehow muddled through and ended up pretty happy with myself. 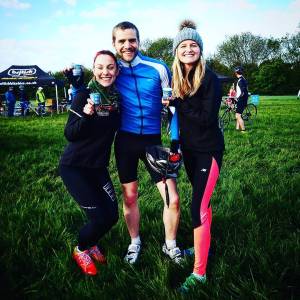 Thanks to a lift from another Chaser, I arrived in plenty early; leaving me with enough time to get a pic with Helena and Ellen from Truestart Coffee (which I’ve started referring to as my ‘secret weapon’ ahead of hard training sessions/races) which I’m still looking at and hoping to figure out what exactly my sassy spine is doing.

It was at this point I made three consecutive errors in a short space of time. One: people were lining up at the start so I panicked, also lined up, and then pushed towards the front of the line. I ended up in about the second group of riders to set off, which was full of veteran men with leathery sun-beaten skin and sleek aero bikes, the type of guys who have spent so long in the saddle they’ve practically fused with their steeds like some post-apocalyptic wasteland dweller. I am fresh faced like a child (glowing, even, but not from the apocalyptic wasteland), and was riding a five hundred quid my-first-road-bike. This ended about as well as expected: around mile eight, where the group started splitting up and I got left behind toot suite.

This was still enough time for error number two, which was realising far too late that when in a peloton of about sixty riders, people no longer seem to bother pointing out potholes. One nasty bump, a flying drink bottle and some very loud and enthusiastic foul language later, and my hydration plan has gone out of the window.

Error three, to be fair, was less an error and more a tactical decision. While being fairly important to my Ironman Kalmar training, it was still very much a training event for me. So, when the larger groups started splitting down, I made a silent deal with myself: no drafting from here on out, or as little as possible. I’d be doing this by my own legs, not anyone else’s, because can you draft in an Ironman? Well, yes, if you don’t get caught, but you’re not supposed to (like many fun/bad things in life).

This is not to say people didn’t take advantage of this. There was one guy who, for about forty miles, stuck so tight to my back wheel that I’m practically obligated to make a joke about steak dinners. He matched my gear changes, I could hear him get out of the saddle when I did. I may have actually met my doppelgänger, but to be honest I didn’t turn around to look and I have no idea who he was – I lost him (or he lost me) when I pulled into a feed station somewhere around mile 62. There were others (an entire peloton’s worth of a certain cycling club springs to mind, you freeloading bastards) but this one guy was definitely the most egregious example.

I ended up having to make one more feed station stop than was planned – on the subject of feed stations, roast potatoes? Really? We’re athletes dammit – due to needing to fill up my one water bottle more than I thought I’d need to, but other than that and the helmet incident, there were few hold ups. I managed to stick with the lessons I’d learnt from Coach Tim on keeping a high cadence, especially on the uphills. This led to the odd situation, particularly towards the end of the race, where I would catch swathes of aforementioned grunting bikes-human hybrids, breezing past them at 100 RPM – and then promptly get absolutely ruined as soon as we crested the hill and hit a downhill.

In the end, my pacing for the first half of the race would have put me on for somewhere under six and a half hours, but I faded a little in the second half. My moving time ended up at six hours, forty three minutes, fifteen seconds. Including stops, change that to fifty four minutes and thirty five seconds. I’m pretty happy to have come in under seven hours, all things considered. Moreover, I’m pretty sure that if I can manage a course that savage on a cheap road bike, a flat course on a multi-thousand pound TT bike where I may have to worry about a little bit of headwind should be a doddle. The bike being the great unknown for me at the start of this process, it’s very, very encouraging.

More so, I’ve conquered one of the biggest fears I had with the bike leg – the mental aspect of it. I wasn’t sure, initially, how comfortable I’d be pushing myself for up to six hours on an Ironman bike leg, trapped with nothing but my own scathing internal dialogue for company. Honestly, it wasn’t even a problem. Even on the grizzliest of hills, nothing. There was no quit in me – just a desire to get the job done. That’s a bigger victory than the time, honestly.

Where next? Well, I’ve signed up for the polar opposite in bike race terms next weekend: I am entering the weird and wonderful world of time trial racing, with a flat ten mile out and back course next Saturday, where I will gear up like a proper aero weenie with my fancy helmet and my new fancy name-crotch tri kit.