Ooh gee whizz crikey moses it’s been some week. A lot has happened. Let’s do a quick recap.

Last weekend was my last weekend as a free man. Naturally, I contrived to make this as busy and non-restful as humanly possible. First up, there was a bit of cross country to do some running in, and, shock-horror – I actually managed to pace a cross country race correctly! Finally, a year late, I have managed to tick the ‘scored club points in the Surrey XC league’ box that I missed out on last year.

It’s a small goal, but the sense of accomplishment is welcome; small goal completion is a great motivator. Part of the psychological-reconfiguration I’m attempting to carry out on myself this year is to make the small goals a priority. Grandiose statements of intent are good, but they’re also very intimidating, and too complicated to be realistic. If I can make this season one of lots of small ticks, rather than one giant tick with an equally giant question mark next to it, I’m hoping that will help bring my motivation back. I will then sit in my favourite reading chair with a cup of tea clutched in both hands and smily wryly, feeling smug that I am possibly the most self-aware man alive. Or something.

Next up was straight home to suit and boot up, and pop off to a lovely wedding for two lovely people. Alex and Katie from Goodgym tied the knot in spectacular fashion; I think I have mentioned previously in this blog that Alex was responsible for introducing me to the Chasers, so you can blame him for pretty much all of this. Yeah, cheers Alex. I’m not posting any evidence of my ‘dancing’. 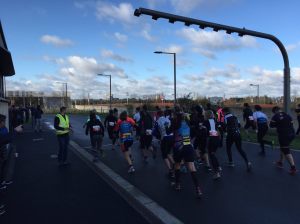 About five hour’s sleep and then up and off again. Last Sunday I ticked off a microgoal that I didn’t even know was a microgoal but it still feels pretty cool: I race directed a race! A duathlon, in fact. One for women. It was a super cool event, Chasers marshals did a fantastic jobs, and the competitors took me getting the number of laps wrong in the pre-race briefing in good humour, so that was nice. Also no-one died, or was seriously injured, although I think several might have got minor pneumonia from the wind chill. East London is very exposed, and I don’t mean in the everyone’s walking around in rather odd looking greatcoats exposed (although it is East London, so probably that as well). 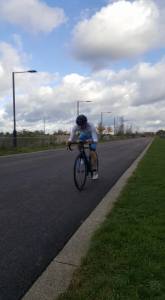 I had time to spin a couple of quick laps (can confirm: still not Froome) before shooting back to comfortable South London where people wear clothes, for some post-wedding debrief drinks, and that was my weekend. Done, gone. Life has since returned to normal, and by normal I mean ‘oh my god why are there not enough hours in the day how am I meant to fit all this sweat and suffering in’.

Week one of the new plan with Coach Tim has gone… well. Microgoals wise, I have hit every session – my new motto for this year is Just Get It Done. Stop finding excuses to bail out of stuff, just do it. As much as the microgoal thing is me giving me a little bit of slack here and there, I also need to kick back on with the discipline. I’m not going to manage every single session this year – no silly massive overly complex plans – but seeing as the last time I managed every session I had planned in a week was the last peak week before IM Kalmar, it seems fortuitous. If I can just take it week by week, I am hoping I can kick back into gear.

It was not a week without issues – my bike power numbers were disappointing, which wouldn’t usually be a massive shock at the start of a new season I guess, but it’s not like I haven’t graced a saddle in the two months since IM Wales. A swimming CSS test didn’t quite go to plan, but that was more expected, and I’m confident I can rebuild that within reasonably short order. And I still hate most swimmers everywhere, but that is partly down to me choosing to go swimming at weird times. If I swam in the mornings like normal abnormal wannabe athlete people, I wouldn’t be getting outswum by 5 year olds at their school gala in the lane next to mine now, would I?

The culmination of one single solid week of training managed to coincide nicely with another yearly benchmark – the Clapham Chaser’s anniversary do. I should probably have another pic here, but er, well…

So, last year I won the coveted prize of Chaser of the Year, riding high off my blogosphere ratings and Swedish success. That was pretty momentous. This year, I had what I’d consider to be a less successful personal year, but made it onto the shortlist for the prize. No, thought I, not a chance. There were way too many deserving people on the list this year, and I’d been quietly grafting rather than loudly brilliant (I think). Hell, the person I voted for to win the award didn’t even make the shortlist. The field was stacked.

By the end of the night, I’d become the only person in the club’s 12 year history to retain the Chaser of the Year award. Now that was a shock. I didn’t even have to beg, blackmail or cheat in any way. The subsequent revelry and all the shots: also a shock. Waking up feeling like I need an exorcist and realising that I’ve fucked up my phone screen, and that a) my coat and b) the glass engraved tankard of victory aren’t with me: definitely a shock. Hence no photo, because I’m still trying to track the award down. I mean, there’s a part of me that’s embarrassed that I had it for all of about four hours before losing it in a boozy haze, but then I guess that was probably the most Chaser-y thing that could have happened, so I guess it works? Anyway, it’ll turn up, and rest assured I will Instagram the shit out of that like a good modern young-ish person.

Honestly though, it’s bloody lovely to know that the stress and the fretting has been appreciated, and to be able to be part of such an incredible group of lunatics is wonderful. Just the small matter of an AGM to get through next week and then I can start working out how to lead the triathlon side of the club on through 2018. It’s going to be a toughie, but there’s good stuff ahead.

So that gets us up to today, anyway. A hungover mess, I have mainly spent the day alternating between lying on the sofa asleep, and lying on the sofa playing Skyrim (thankyouthankyouthankyou Coach Tim for the rest day). At about 2:30pm, I took a pause from this to transfer some money between bank accounts, and then promptly reconfigured my entire 2018 season and long term plans.

(Sorry, I don’t mean to be so dramatic and cliff-hangery, but I feel like in a few minutes I’m going to have to go and throw up somewhere. More incoming.)

Listening to: 65daysofstatic – Debutante, which is kinda keeping me going. 65DOS are such good energy makers.
Reading: a race manual, furiously.