I will die on this island.

I’ve always been a fan of sci-fi, the grimmer the better. Cyberpunk is my jam. Before the days of Zwift, I spent my turbo sessions catching up on classics. Weirdly, one of these sessions was the only time I managed to make it through Ghost In The Shell without falling asleep (the 1995 animated version, you philistines). Still not got those robot legs, and feel like I could use them right now. Dammit.

The other thing related to that first video that I suffer with a preoccupation with is death, and dying. That’s just how it is when you’ve been dealing with suicide for years. I had a horrible moment of realisation at work last week, when I was talking to one of my colleagues who has a rough outline of the depression thing, when I said out loud I’d lost hope in ever beating it after 15 years of trying. 15 years. If we go with 13 as the rough age that ‘it’ started, being the age at which I started self harming, then I have spent more of my life living with depression than I have spent without. I’ve possibly had this realisation before, but can’t really be arsed to go back through my posts and check.

Recently I have been suffering again. I had to miss a few days of work, and my taper for Lanzarote was actually pretty awful. Having forced myself into the habit of being a morning person over the last few years, things begin to fall apart quickly when you can’t justify getting out of bed. The urges to self harm came back; I did not, but could have. Then Monday rolled around, and next weekend was the race, and Bam. Race focus. It was all gone.

Despite my maudlin propensities, I’m actually not feeling to bad about Lanzarote. Last year, I got a bit overconfident, and suffered for it. Psychologically, I’ve felt more this past week like I did in the run up to Kalmar – confidence tempered with wariness, calmer and more focused rather than wrapped in hubris.

At least, this lasts until I have been thinking about the descents; after all, what goes up must surely come down. 5 big climbs, 5 big descents. When it comes to the idea of descending down the side of these volcanoes, I have firmly ensconced myself in a mental blanket fort fashioned from my own hubris. When I said there was a third part to my thoughts on bike preparedness, this is what I was referring to.

I know I have a propensity, in races, to descend in a slightly ballsy manner; confidence, not common sense. This year I’ve switched to carbon wheels for the first time, and not carbon fairings with aluminium rims like I have previously – carbon rims, with carbon brake tracks. The carbon wheels with the best reported braking performance I could afford, but still. Carbon.

There aren’t a great many places in South England where you can practise the kind of descending you find in continental races. They tend to have less potholes over here, for one, and less idiot drivers as well. So my descending is based largely on instinct rather than any set process. Go fast hit, the brakes around about, oh, hmm, say, HEREEEEEEEEEEEEEEwidelineturndriftdriftdriftohfuckImadeitahahahahahahaha.

Being that my instinct for descending and choosing the right spot to apply the brakes is based on aluminium brake tracks, I have been stuck with a premonition for some weeks now. I can see it in my head, feel it almost. The moment of panic as I realise I was a second too late, that these wheel’s don’t slow. They’ll be able to say I died doing what I loved: jackknifing uncontrollably through the air having been launched off the side of an arid hill, screaming in terror as the full weight of my actions and their repercussions hit home.

Does that mean I am going to take the descents easy today? Does it fuck. I have come to terms with my glorious, Icarian destiny. Besides, if I really want that top-10 age-group finish, I’m going to need to hit the downhills hard. Hopefully the shallower wheels than many of my counterparts will pay off and my lines will be straight when they ought to be, and perfect parabolas when they need to be.

I wrote most of this last night in between discussing how best to fashion emergency peanut butter baguettes into aerobars, so apologies if the tense or lucidity is off at any point. 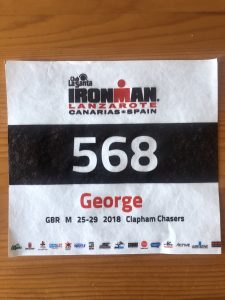 For those that want to track me – seriously, the Ironman app is your best bet, their website is janky as fuck. But if you’re old school, this is the link you want, and I’m number 568. Like up there. In the picture.

Anyway, gotta run, race to do and all that. Report to follow.